A spirit lost in the dust

I found the burning man festival when I was 21 years old after moving to San Francisco the summer after I graduated from college. My brother Jon lived in the city and, after numerous spring break visits to the bay, it was decided… I was in love. Aside from experiencing a dynamic and eclectic city culture, I loved watching the fog roll through the red struts of the Golden Gate Bridge like quickly moving puffs of cotton balls engorging the city and infiltrating the surrounding waves of the bay. And so it seemed appropriate the city was the natural progression to start my adulthood. The dot com industry was booming and there was a job for anyone arriving fresh to the scene, even me with absolutely no experience in business or the internet. So I packed up my Honda Accord with my Colorado plates still attached, stuffed the car to the gills and set out on a road trip across the country to find myself in my new home out West.

I arrived just before Labor Day weekend and took up a partial residence on my brother’s couch. Not knowing a soul in the city and no plans for the weekend, my brother nonchalantly asked if I would like to road trip to Tahoe to see a part of northern California I’d never been. I was game and so we set off in his truck with a small bag packed with jeans, a couple fleece jackets, a small charcoal Weber grill and a cooler full of basic camping needs.

A few hours in, after a much-needed nap in the car, I awoke in the middle of the night speeding down a dark highway in the middle of nowhere, literally. Unfamiliar with this part of the country, I figured we were officially off the grid and heading to the beautiful Tahoe camping area. But something struck me as strange as the vegetation was devoid and it seemed like we were on another planet, quiet, dark and desert-like. Where were we?

With a smirk and an excited giggle, my brother announced in an emphatic voice that we were not in fact going to Tahoe, that he was taking me to the Burning Man festival for the weekend, a counterculture event in the middle of the Black Rock Desert in the Northwest region of Nevada. He popped open his middle console and pulled out 2 tickets for the festival explaining he wanted to surprise me for my genesis of arriving to the West Coast. I was totally in shock as to his elaborate surprising scheme but figured my new life in California should represent embracing a different lifestyle, appreciation of radical art and a “go with the flow” attitude. Was I in for a huge surprise.

And so we went. It’s nothing like what I thought and incredibly difficult to explain in this short blog, but in a nutshell, it was an exceedingly inspiring and life-changing experience. The extraordinarily kind and upbeat people I encountered, the awe-inspiring large-scale art installations placed on the dusty desert floor and a freedom from the drudgery of the real world captivated my heart forever. The event changed my life for the better, improved my outlook on the positive abilities of humanity, the beautiful co-creation of community and art all the while finding the stillness and beauty the desert provides without cost. It changed my life so dramatically that I participated, volunteered and worked at the event for 13 years. There is no question it molded who I am today.

Just this past week, the founder of Burning Man Larry Harvey passed days after suffering a major stroke in his home in San Francisco – he was 70 years old. I met Larry a few times in my inner workings on the playa and he struck me as an eccentric yet incredibly insightful and dedicated human being that encouraged community, pushing the envelope of life’s experiences and celebrated being different and owning that within oneself. He once said “… The trick is to find that point of what you are coincides with the world in some way… Then suddenly your dream is there, and as in a dream you just step into the frame of the dream, and everything in your world is meaningful and you were born to be in it, everything is animated and you belong to it…”

These words may or may not make sense, but to me, they are hugely impactful because I believe being injured and now living my life in a wheelchair was the point where what I am now coincides with the world so much more than before the chair. Whether or not this was my intentional dream, it is a meaningful place to be and I now know I was born to be in this place, and I belong to this reality. It was and is my destiny. Just knowing that helps me move forward, believe in myself a little more each day and recognize that I am an important puzzle piece of my reality and this world. Great advice for us all.

Thank you Larry, Godspeed and RIP. 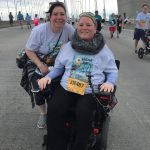 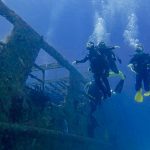 Diving in the momentBlog Posts