Dignity and grace, my unsung hero

My father Ronald John Forst was a legend. His professional career saw him as a highly accredited and admired naval officer, serving over 27 years in the United States Navy. He was a graduate of Kings Point in New York and while there, met my mother on a blind date, courted quickly with an intense love that blossomed into a 53-year long marriage, the kind of marriage so rare and lovely because of their lifelong dedication and admiration for each other. This love saw six children born into an environment that was enhanced with widespread cultural exposure and multiple military–induced moves across the country and world proving that each of us children could adapt in any new environment. Whether it be new schools, new friends, new surroundings, new sports teams or new neighborhoods, we learned quickly how to adapt and survive because we had each other. Our sibling bond is strong because of these experiences, even to the present day.

My father got colon cancer, the type of cancer that creeps up on you when life seems so great and full. You’re never truly prepared when you get that phone call from your dad saying he has only two years left, at best. Two years of chemotherapy and toxic poisons dripping into his veins, side effects such as mouth sores, neuropathy, vomiting and diarrhea and just a general constant feeling of malaise from the poisons. Interrupted life, interrupted family functions, and disrupted family happiness became the norm, yet we learned how to survive together and adapted our environments to ease his pain, to ease our pain. Our bonds grew even stronger.

My father passed on December 8, 2011. It was three in the morning; he was home in bed and in a coma. I was 33 years old, three years before my spinal cord injury was even a reality. I held his hand while he passed, all the while assertively telling him to find the light assuring him we would all be okay on this earth without him. We would survive, we would adapt just like we had been taught so many times during childhood. It was a moment burned into my memory forever, and as difficult as it was to say goodbye, I have such immense gratitude to have been present during his transition. My mom held his other hand and as he tightly squeezed her hand with his infamous military grip, she knew he loved her, he was saying one last goodbye, fighting every last lost breath all the while communicating that yes… everything would be okay. He exhibited such dignity and grace even to his very last breath.

My dad did not know me in a wheelchair. To be honest, I’m not sure he would’ve survived witnessing my walking life transition into a wheelchair life, but I know he is proud of me and my accomplishments over the last four years, especially my extensive traveling because he himself traveled the globe numerous times during his naval career. Hence my extreme desire to fly to Arlington National Cemetery in Washington, DC, over the Labor Day weekend to bring myself in my wheelchair to his gravesite to pay a little visit to one of my greatest heroes. I was there when he was buried, I witnessed the Marines fold his American flag that had been draped over the coffin, I listened to the Navy band play “Taps” and shuttered hearing the 21-gun salute. It was quite an emotional moment to return to this place and sit before him in my wheelchair. All I could think about saying to him in my mind was “Hi dad, look at me now”, almost as if his ghost was sitting on the ledge of his tombstone having a casual conversation with me after many years of absence as I tell him about my spinal cord injury for the first time. It was a surreal moment.

As I sat in my wheelchair and looked over his tombstone onto what appeared to be miles and miles of beautiful white gravestones hallmark to Arlington’s National Cemetery, it made me realize the degree of survival and adaptation that not only my family underwent but thousands and thousands of other families that experienced a similar ending to their parent, sibling or best friend. It is in this essence of survival that truly embodies the human spirit, whether you are surviving cancer or spinal cord injury or amputation or depression or drug addiction or traumatic brain injury. It is truly all the same when we consider that we are the survivors, we are the ones that continue to persevere through hard times, and we are truly all in this together.

I know that if my father were alive today, even in his elderly years, his message would be tried-and-true. And the message is… Life is short, stay on the straight and narrow and never ever give up. 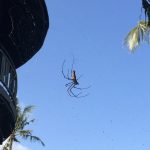