The sensation is difficult to describe but universally understood.

Elizabeth Forst (better known as EB) calls it the most freeing moment she experiences throughout the year.

Once a year EB enjoys a few days scuba diving with a group of people from Craig Hospital’s therapeutic recreation department along with A1 SCUBA of Littleton.

EB is paralyzed from the neck down. Taking a dive into the ocean is something she does with extra risks. She can’t imagine not taking that risk – to feel the freedom of the dive.

It is ironic given that it was an accident in the water that led to her paralysis.

“Even though it tried to kill you essentially because you broke your neck in a pool,” EB said. “Trust yourself, trust your team. Have fun. Enjoy it.”

9NEWS recently met with EB as she trained for her scuba trip this summer, which she said was perfect. In a few days, she will mark four years since her accident. This is what she wrote as she approached this day last year:

Three years ago tonight, I ran around the side of a neighbor’s pool in Charlotte, North Carolina and dove headfirst like I had done thousands of times in many different swimming pools in my lifetime. See, I grew up swimming, I was a long-distance swimmer – I was a triathlete – and the pool and the water was like a natural home for me. I often laughed saying I was a mermaid or fish in a previous lifetime – probably why I ended up becoming a scuba diver 20 years ago because I’ve always been fascinated with water and breathing underwater. I loved the water.

But this particular night – this particular dive, three years ago, sealed my fate forever as I hit the slope between the shallow and deep end of the pool and I broke my neck at the C4/5 level instantly paralyzing me from the shoulders down. I remember hearing the click – it was a small click – but it was the sound of my neck breaking into fragments piercing my spinal cord. I never lost consciousness – in fact I was more awake than ever. Thanks to my background in sports, swimming and especially yoga, I held my breath for almost a minute waiting for someone to pull me out of the water, there were others in the pool with me and they simply thought I was joking drowning as I floated upside down with my arms and legs dangling below me in the deep end. I could not lift my head out of the water to take a breath so I just held it. I remember thinking a silly thought – that if I opened up my eyes that I would ruin my contact lenses in the chlorine water. It’s funny what you think of before you’re about to move on to the next universe. As the seconds clicked by I realized I was about to drown and I started to float away – energetically. But panic never set in – and a huge sense of peace and calm came over me. I was dying. And everything was actually okay. I wasn’t afraid, I wasn’t panicking, it was just a sense of release and lightness. Maybe I would finally see my dad or my brother in heaven.

Luckily, at the very last second before I drifted away, I was flipped over and pulled out of the pool. I knew right away that I was paralyzed – I just didn’t know at that time that it would be forever.. Within minutes I was in a helicopter being transported to Charlotte Medical Center. I went into the first surgery alone – I was scared, I had no idea what was about to happen for the rest of my life, I was supposed to be surprising my friends at burning man in a few weeks and I had a job starting two days later in San Francisco. I had plans to meet with friends in the city, dinner drinks, meet ups at the coffee shops…. I had patients that would be waiting for me. These were the things that I was thinking about…

I spent one week in the ICU, 2 neck fusion surgeries Later, hours and hours of respiratory therapy to clear my lungs of pneumonia like crap because I refused a tracheotomy – they stuck all sorts of tubes and suction devices all the way down into my lungs while I was awake and avoiding throwing up all over them, learning that I couldn’t scratch my forehead anymore or brush away the hair from my eyes. I couldn’t cough or sneeze because my diaphragm was so weak. I couldn’t eat or drink for myself. I couldn’t even talk because I had an intubation tube in my lungs and so I had to mouth letters to the nurses and my family in order to communicate my wishes/wants. The squeezing of the neck collar, the morphine that made you feel like you are in the matrix flying around the room. Staring out the window looking at the beautiful skyline of Charlotte, realizing that you could not get there and that you are trapped in a bed, in a hospital room with no ability to communicate or move.

This is my story. This was August 16/17th 2014 where my life changed forever. You know I’ve heard the comment many times that God will not give you more than you can handle – and apparently God thinks that I can handle a lot because it’s not an easy road – it’s damn right impossible sometimes. There have been lots of ups and downs. And I still feel such sadness that this has occurred to me. But its days like today and tomorrow in 2017, three years later, that I have to spend just a few minutes thinking about that time and have the emotion, have the cry and then move on. It’s all you can do. 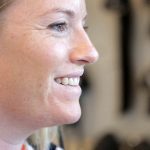